Did the ancient Egyptians eat like us? If you’re a vegetarian, tucking in along the Nile thousands of years ago would have felt just like home.

In fact, eating lots of meat is a recent phenomenon. In ancient cultures vegetarianism was much more common, except in nomadic populations. Most sedentary populations ate fruit and vegetables.

Although previous sources found the ancient Egyptians to be pretty much vegetarians, until this new research it wasn’t possible to find out the relative amounts of the different foods they ate. Was their daily bread really daily? Did they binge on eggplants and garlic? Why didn’t someone spear a fish?

A French research team figured out that by looking at the carbon atoms in mummies that had lived in Egypt between 3500 B.C. and 600 A.D. you could find out what they ate.

All carbon atoms are taken in by plants from carbon dioxide in the atmosphere by the process of photosynthesis. By eating plants, and the animals that had eaten plants, the carbon ends up in our bodies.

The sixth-lightest element on the periodic table – carbon – exists in nature as two stable isotopes: carbon-12 and carbon-13. Isotopes of the same element behave the same in chemical reactions but have slightly different atomic masses, with the carbon-13 being slightly heavier than the carbon-12. Plants are categorized into two groups. The first group, C3, is most common in plants such as garlic, eggplants, pears, lentils and wheat. The second smaller group, C4, comprises foodstuffs like millet and sorghum.

The common C3 plants take in less of the heavier isotope carbon-13, while the C4 plants take in more. By measuring the ratio of carbon-13 to carbon-12 you can distinguish between these two groups. If you eat a lot of C3 plants, the concentration of carbon-13 isotopes in your body will be lower than if your diet consisted mainly of C4 plants.

The mummies that the French researchers studied were the remains of 45 people that had been shipped to two museums in Lyon, France during the 19th century. “We had an approach that was a little different,” explained Alexandra Touzeau, who led the research team at the University of Lyon. “We worked a lot with bones and teeth, while most researchers study hair, collagen and proteins. We also worked on many different periods, with not many individuals for each period, so we could cover a very long time span.”==============

The researchers reported their findings in the Journal of Archaeological Science. They measured carbon-13 to carbon-12 ratios (and also some other isotope ratios) in bone, enamel and hair in these remains, and compared them to similar measurements performed on pigs that had received controlled diets consisting of different proportions of C3 and C4 foodstuffs. As pigs have a similar metabolism to humans, their carbon isotope ratios could be compared to what was found in the mummies.

Hair absorbs a higher rate of animal proteins than bone or teeth, and the isotope ratios in hair of the mummies corresponded to that found in hair of modern European vegetarians, confirming that the ancient Egyptians were also mainly vegetarians. As is the case with many modern people, their diet was wheat- and barley-based. A main conclusion of the research was that C4 cereals, like millet and sorghum, were only a minor part of the diet, less than 10 percent.

But there were a few surprises.

“We found that the diet was constant over time; we had expected changes,” said Touzeau. This showed that the ancient Egyptians adapted well to the environment while the Nile region became increasingly arid between 3500 B.C. and 600 A.D.

To Kate Spence, an archeologist and specialist in ancient Egypt at the U.K.’s University of Cambridge, this could be expected: “Although the area is very arid, they were cultivating crops along the river just by managing irrigation, which is very effective,” she said.  When the level of the Nile decreased, farmers just came closer to the river and kept on cultivating in the same way.

The real mystery is the fish. Most people would probably expect the ancient Egyptians living along the Nile to have eaten loads of fish. However, despite considerable cultural evidence, there seems to have been little fish in their diet.

“There is abundant evidence for fishing in Egyptian wall reliefs and models (both spear and net fishing), and fish shows up in offering lists.  There is also a lot of archeological evidence for fish consumption from sites such as Gaza and Amama,” said Spence, who added that some texts indicated that a few fish species were not consumed due to religious associations. “All this makes it a bit surprising that the isotopes should suggest that fish was not widely consumed.”==============

Were the ancient Egyptians healthy, while basing their diet on wheat?

Nutrition in ancient Egypt centered around bread, beer, and vegetables. An abundance of barley and emmer wheat available to the Egyptians led to a diet heavy with many variations of bread and (nutritional) beer, while advances in domestic livestock and agriculture allowed for sufficient intake of plant and animal products.

Bread held significant cultural importance as it was an integral item within ancient Egyptian nutrition and was featured at almost every meal. Emmer, rich in protein, carbohydrates, and various vitamins, was nearly exclusively the only grain used in baking bread, though barley was sometimes used as well. These loaves of bread were sometimes flavored with herbs like cilantro, though they were likely typically eaten unseasoned among the poor.==============

While seemingly counterintuitive, ancient Egyptian beer was highly nutritious and was featured at almost every meal. One of the processes for making beer involved fermenting partially uncooked bread in a pot of water. This produced a fermented drink populated with barley solids, serving as an excellent source of protein and carbohydrates. This drink was perhaps nutritionally comparable to Greek kykeon, though kykeon was not always alcoholic.

Next to bread and beer, plant products such as vegetables, fruit, and legumes were most common in the ancient Egyptian diet. Gourds, celery, onions, beans, and peas could all be cooked into a stew or served as a side dish. Archeological evidence suggests Egypt imported olive oil from Mesopotamia, though Egyptians often made their own oil from sesame, lettuce, and radish seeds. Popular sweet fruits included Pomegranates, grapes, dates, and figs.==============

Ancient Egyptians had moderate access to meat and other animal products. Fish and domesticated cattle, pigs, sheep, and poultry all served as a good source of fats and proteins within Egyptian nutrition. The most common types of meat were likely pork and mutton, though beef was moderately available as well. Domestication of chickens around the 5th century BC provided a fair amount of poultry and eggs. Domestic cattle allowed for production of milk and butter for both cooking and consumption as well. 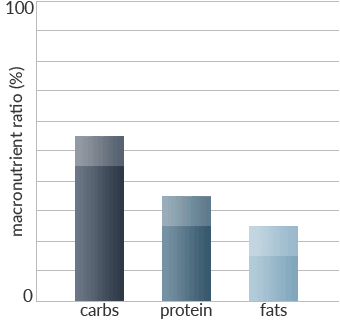 With regard to modern nutritional recommendations, the average ancient Egyptian citizen likely had an excellent diet. This diet consisted of substantial amounts of grains, followed by fairly heavy amounts of other plant products, including vegetables, legumes, and fruits, all in tandem with moderate consumption of meat and dairy. On average, this diet would provide desirable macronutrient ratios and supply sufficient micronutrients for the Egyptian citizen. With these things in mind, the average macronutrient ratios within ancient Egyptian nutrition were likely around 45-55% carbohydrates, 25-35% protein, and 15-25% fats.==============

Listed below are some foods that would have been commonly found in the ancient Egyptian’s diet, organized roughly by food group.