We’re always on the lookout for the next big thing, and even our best guesswork is often terrible at anticipating exactly where it will come from. In the 19th century, we were arguing over whether combustion or gravitation powered the Sun, never suspecting the process of nuclear fusion was at play. In the 20th, we argued over the fate of the Universe, never imagining it would wind up accelerating into oblivion.

Yet revolutions in science are real, and when they occur, they cause us to rethink many things — and perhaps even everything — that we’d previously assumed to be true. There are all sorts of foundational components to our knowledge that we rarely question, but perhaps we ought to. As far as revolutionary existential thoughts go, this is the ultimate question: how confident are we in the tower of science that we’ve built for ourselves? 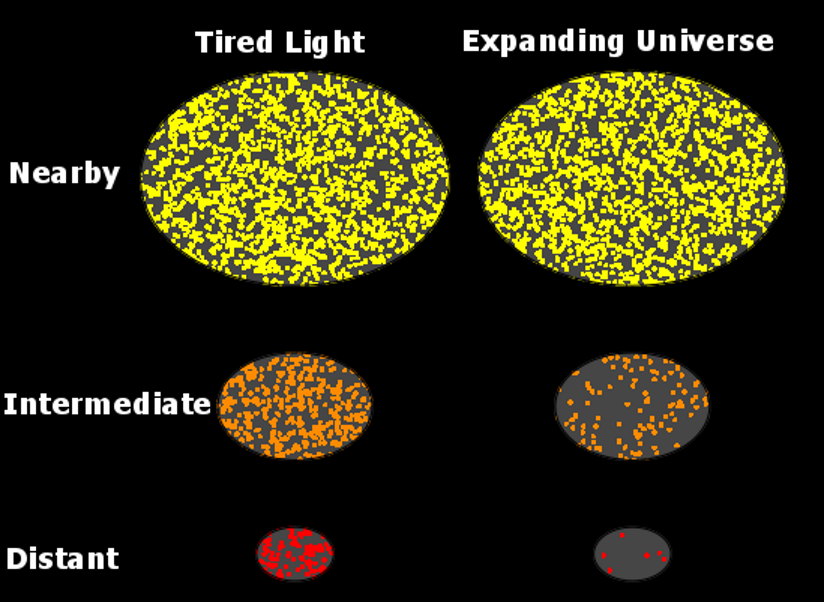 According to the tired light hypothesis, the number of photons-per-second we receive from each object drops proportional to the square of its distance, while the number of objects we see increases as the square of the distance. Objects should be redder, but should emit a constant number of photons-per-second as a function of distance. In an expanding universe, however, we receive fewer photons-per-second as time goes on because they have to travel greater distances as the Universe expands, and the energy is also reduced by the redshift. Even factoring in galaxy evolution results in a changing surface brightness that’s fainter at great distances, consistent with what we see.

The answer, perhaps surprisingly, is that we’re very confident in the entire body of scientific knowledge that we’ve built up. That will remain true, of course, up to a very specific point: until a single robust result comes along that conflicts with it.

If the faster-than-light neutrinos from a few years ago had turned out to be true, we would have had to rethink everything we thought we knew about relativity and the speed limit of the Universe. If the EMdrive or another perpetual motion engine turned out to be real, we’d have to rethink everything we thought we knew about classical mechanics and the law of conservation of momentum. While those particular results were not robust enough — the neutrinos turned out to be an experimental error and the EMdrive has eluded verification at any meaningful level of significance — someday we will likely encounter such a result.==============

The key test for us won’t be in whether we arrive at that crossroads. Our true commitment to the scientific truth will be tested in how we choose to deal with it when we do. 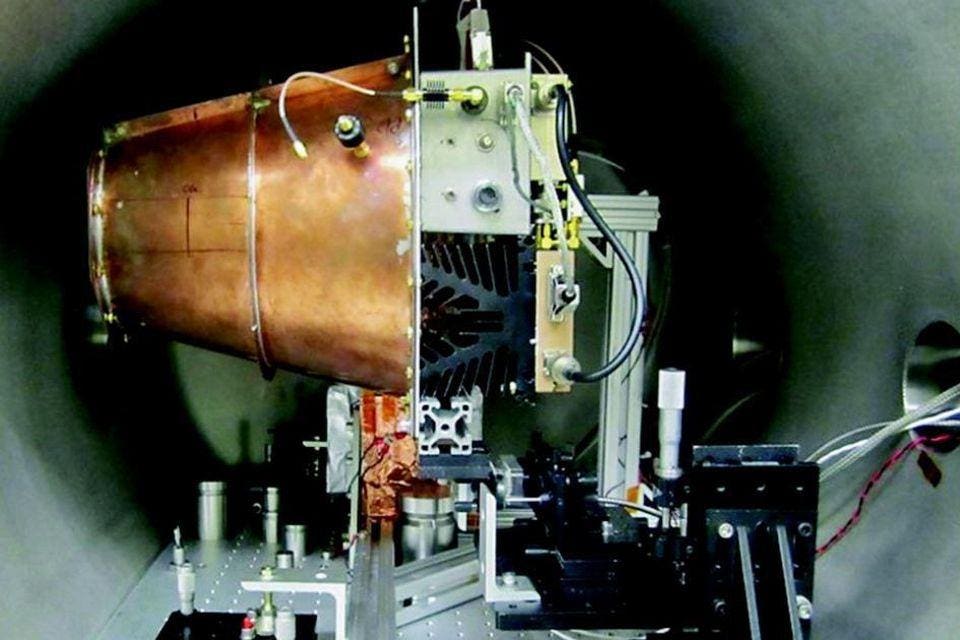 The experimental setup of the EmDrive at NASA Eagleworks, where they attempted to isolate and test for a reactionless drive. They found a small, positive result, but it was uncertain whether this was because of new physics or merely a systematic error. The results have failed to be robustly and independently replicated, however. Until they are, there is no call for a revolution.

Everything we see, everything we hear, everything our instruments detect, etc., is all capable of being — if properly recorded — a piece of scientific data. When we try and put together our picture of the Universe, we must use the full suite of all the scientific data available. We cannot cherry-pick the results or pieces of evidence that agree with our preferred conclusions; we need to confront our ideas with every piece of good data that exists. In order to do good science, we need to collect that data, put those pieces together into a self-consistent framework, and then continually challenge that framework in every way we can imagine.

The best work a scientist can do is to constantly try and disprove, rather than prove, their most sacrosanct theories and ideas. 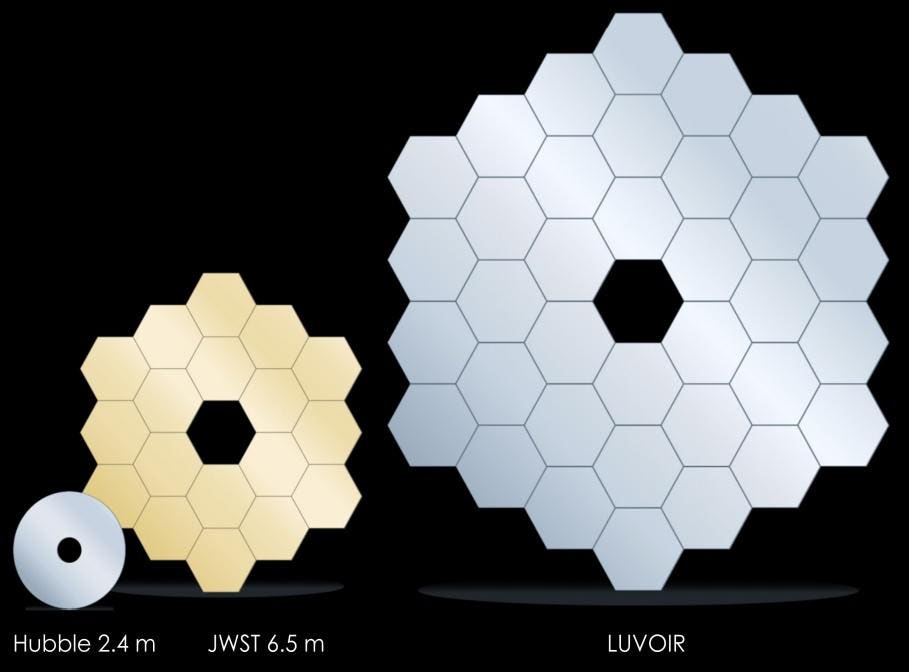 The Hubble Space Telescope (left) is our greatest flagship observatory in astrophysics history, but is much smaller and less powerful than the upcoming James Webb (center). Of the four proposed flagship missions for the 2030s, LUVOIR (right) is by far the most ambitious. By probing the Universe to fainter objects, higher resolution, and across a wider range of wavelengths, we can improve and test our understanding of the cosmos in unprecedented ways.

This means increasing our precision to every additional decimal point we can muster; this means going to higher energies, lower temperatures, smaller distance scales, and larger sample sizes; this means pushing outside of the known range of a theory’s validity; this means theorizing new observables and devising novel experimental methods.============== 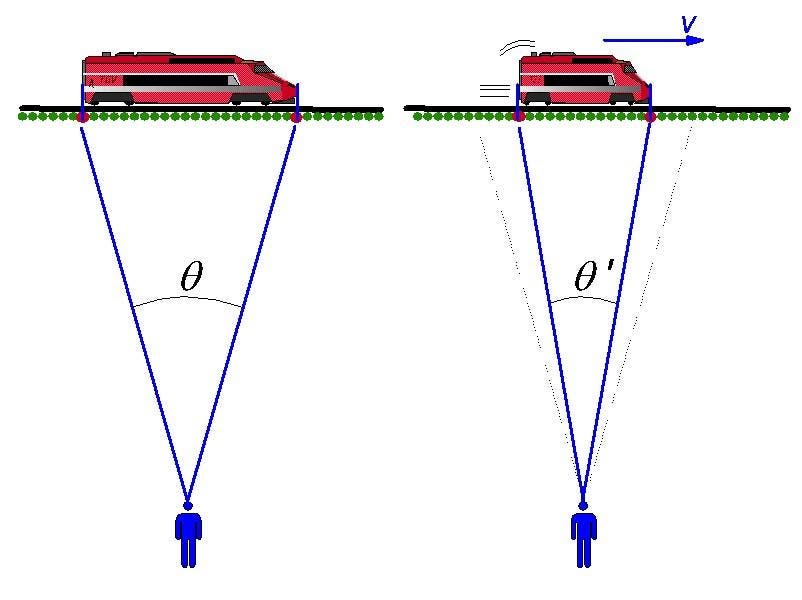 One revolutionary aspect of relativistic motion, put forth by Einstein but previously built up by Lorentz, Fitzgerald, and others, was that rapidly moving objects appeared to contract in space and dilate in time. The faster you move relative to someone at rest, the greater your lengths appear to be contracted, while the more time appears to dilate for the outside world. This picture, of relativistic mechanics, replaced the old Newtonian view of classical mechanics.

A scientific revolution, though, involves more than simply stating, “this old thing is wrong!” That’s simply the very first step. It may be a necessary part of a revolution, but it’s woefully insufficient on its own. We’ve got to go beyond simply noticing where and how our old idea fails us. In order to progress science forward, we have to find the critical flaw in our prior thinking, and revise it until we get it right.

This requires us to clear not just one, but three major hurdles in our efforts to improve our understanding of the Universe. There are three ingredients that go into a revolutionary scientific theory:

This is an incredibly tall order, and it happens only rarely. But when it does, the rewards are unlike anything else. 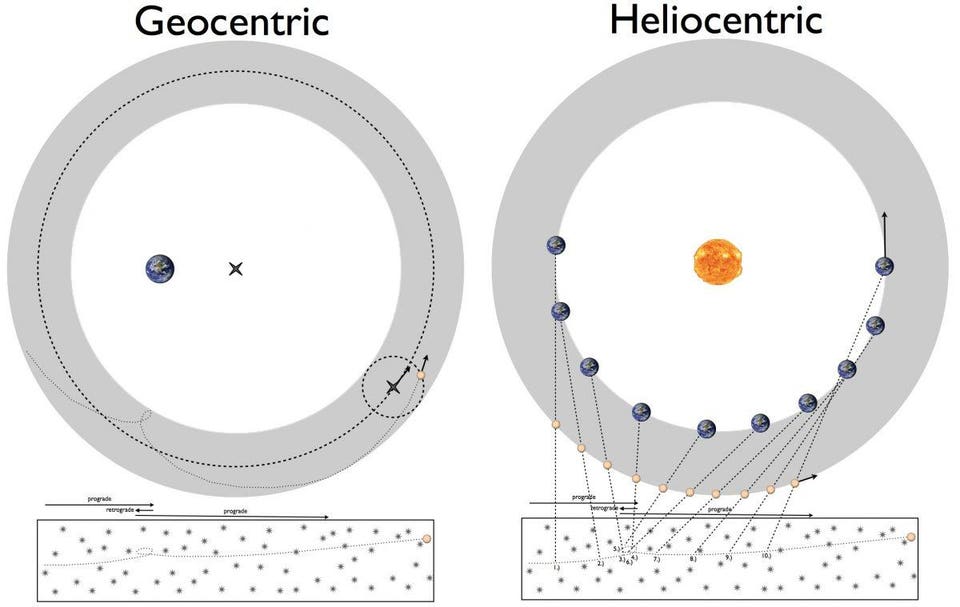 One of the great puzzles of the 1500s was how planets moved in an apparently retrograde fashion. This could either be explained through Ptolemy’s geocentric model (L), or Copernicus’ heliocentric one (R). However, getting the details right to arbitrary precision was something that would require theoretical advances in our understanding of the rules underlying the observed phenomena, which led to Kepler’s laws and eventually Newton’s theory of universal gravitation.

The burden of proof is always on the newcomer to supersede the prior prevailing theory, and that requires it to rise to a number of very difficult challenges. When heliocentrism came along, it had to explain all the predictions for the motions of the planets, had to account for results that geocentrism couldn’t explain (e.g., cometary motion and the moons of Jupiter), and needed to make new predictions, like the existence of elliptical orbits.

When Einstein proposed General Relativity, his theory needed to reproduce all the successes of Newtonian gravity, plus it needed to explain the precession of Mercury’s perihelion and the physics of objects approaching the speed of light, and even beyond that, it needed to make the new predictions of how gravity would bend starlight. 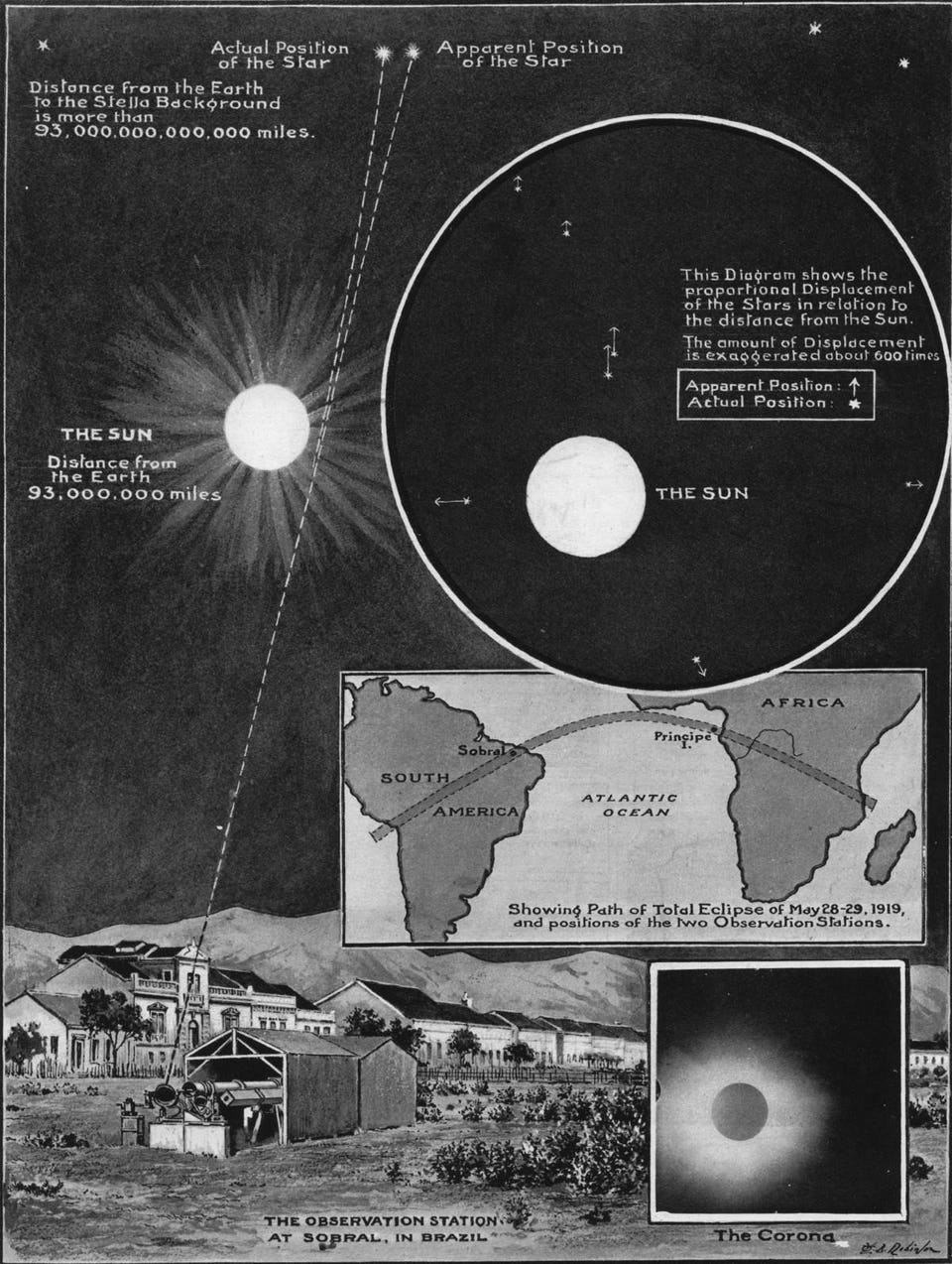 The results of the 1919 Eddington expedition showed, conclusively, that the General Theory of Relativity described the bending of starlight around massive objects, overthrowing the Newtonian picture. This was the first observational confirmation of Einstein’s General Relativity, and appears to align with the ‘bent-fabric-of-space’ visualization.

This notion extends even to our thoughts concerning the origin of the Universe itself. For the Big Bang to rise to prominence, it had to replace the prior notion of a static Universe. That meant that it had to be consistent with General Relativity, explain the Hubble expansion of the Universe and the redshift/distance relation, and then make the new predictions of:

All of that was required just to supplant the prior theory. 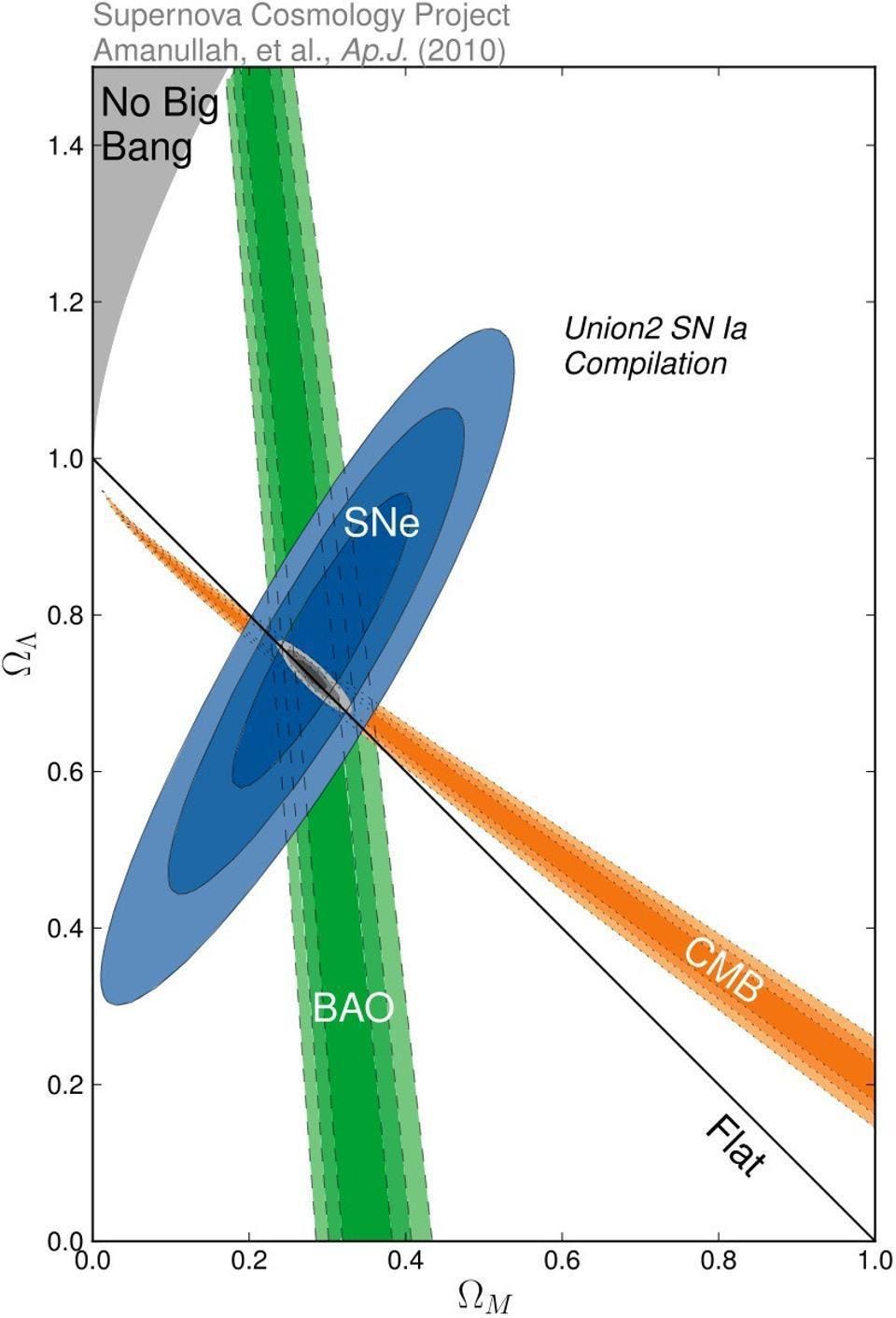 Constraints on dark energy from three independent sources: supernovae, the CMB (cosmic microwave background) and BAO (which is a wiggly feature seen in the correlations of large-scale structure). Note that even without supernovae, we’d need dark energy. More up-to-date versions of this graph are available, but the results are largely unchanged.

Now, think about what would be required to do today to tear down one of our leading scientific theories. It’s not as complicated as you might imagine: all it would take is a single observation of any phenomenon that contradicted the Big Bang’s predictions. Within the context of General Relativity, if you could find a theoretical consequence of the Big Bang that didn’t match up with our observations, we’d truly be in store for a revolution. 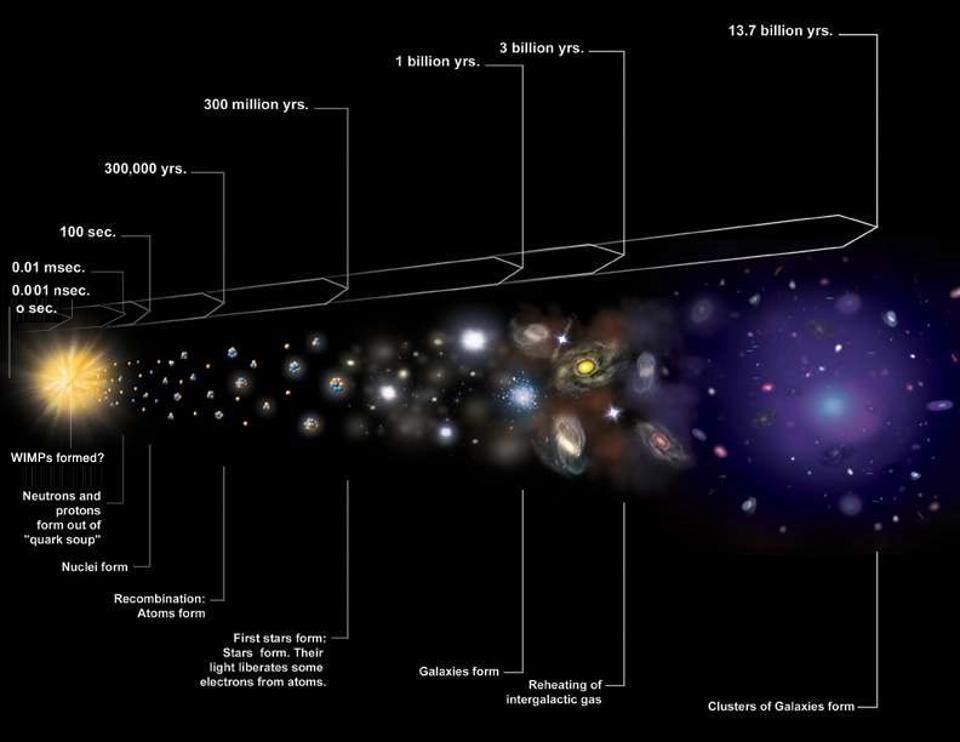 A visual history of the expanding Universe includes the hot, dense state known as the Big Bang and the growth and formation of structure subsequently. The full suite of data, including the observations of the light elements and the cosmic microwave background, leaves only the Big Bang as a valid explanation for all we see. The prediction of a cosmic neutrino background was one of the last great unconfirmed Big Bang predictions, that has now had its imprints seen in both the CMB and in large-scale structure.

Perhaps, someday, sufficient theoretical advances will be made so that one of these alternatives grows into something that’s consistent with the full suite of what’s observed, or perhaps a new alternative will emerge. But that day is not today and, in the meantime, the inflationary Big Bang Universe, with radiation, normal matter, dark matter and dark energy, explains the full suite of absolutely everything we’ve ever observed, and nothing else does.============== 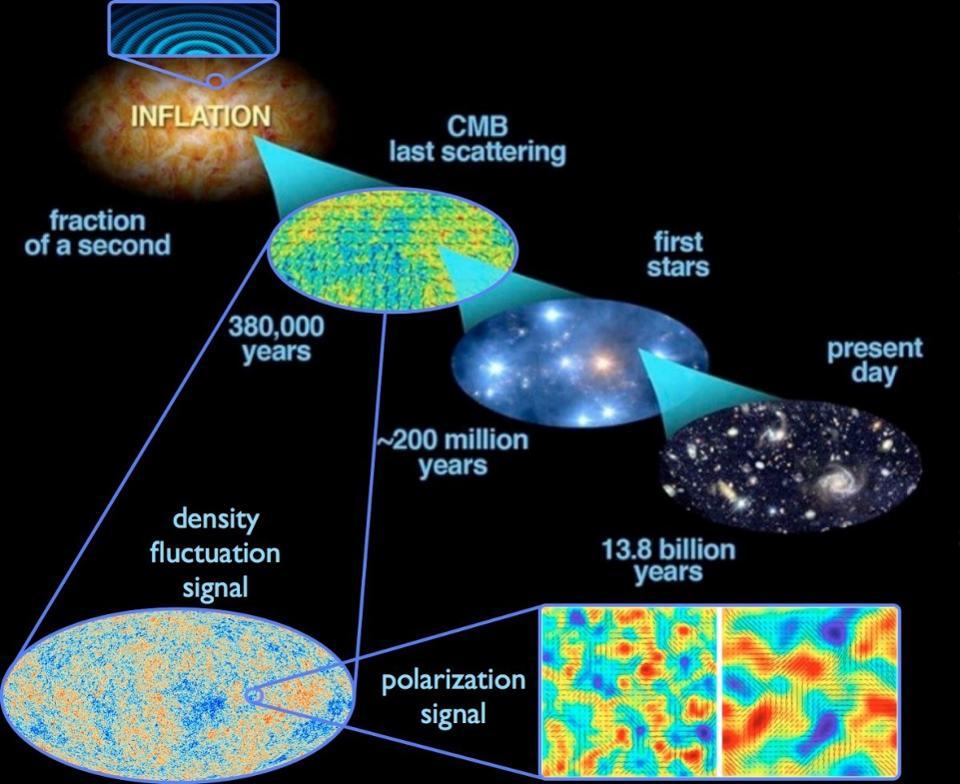 The Universe might turn out to be very different in detail from how we conceive of it today. Like many of you out there, I hope we live long enough to see what challenges, surpasses, and supersedes our best present understanding. But when that occurs, it won’t invalidate what we understand now. Our leading theories of today aren’t wrong, they’re just incomplete. It’s only by replacing them with something that succeeds where the present theory both works and doesn’t work that science advances in any meaningful way.